As reviewed by Ira Stoll

The one and only in-class standing ovation I witnessed during four years of college coursework came during the 1991-1992 academic year, at the end of the final lecture in a class called “Historical Studies B-31, Revolutionary Transformation of America,” taught by Bernard Bailyn.

It wasn’t the kind of scattered applause sometimes heard in an airplane cabin to express relief and appreciation for the pilot after the safe landing of a trans-oceanic flight. It was more like the sustained roar at Madison Square Garden or Carnegie Hall from a crowd that likes a great artist’s concert so much that it wants an encore.

Bailyn officially “retired” and accepted emeritus status in July 1993, back when it was not illegal age discrimination for universities to require professors to step aside when they approached 70. Since then, there has been no shortage of encores. Not in the form of lectures to Harvard undergraduates; the premonition that the one I was at would be Bailyn’s last was what prompted the ovation. Rather, books. Bailyn emits them at a frequency that would be astonishing even from a non-“retired” scholar. The front matter of his latest, Illuminating History: A Retrospective of Seven Decades, lists at least five others published post-retirement, including On the Teaching and Writing of History (1994); To Begin the World Anew: The Genius and Ambiguities of the American Founders (2003); Atlantic History: Concept and Contours (2005); The Barbarous Years: The Peopling of British North America: The Conflict of Civilizations, 1600–1675 (2012); and Sometimes an Art: Nine Essays on History (2015).

This most recent effort is touted on the jacket as “the most personal of Bailyn’s works,” in part “an intellectual memoir.”

Of great interest would be anything that can explain how Bailyn became Bailyn—beloved teacher and brilliant author, winner of two Pulitzer Prizes, interpreter of the American Revolution, mentor to prominent scholars including Brown University’s Gordon Wood and Stanford’s Jack Rakove (both of whom have their own Pulitzers) and Cornell’s Mary Beth Norton (a Pulitzer finalist). Already in 1993, during the course of an extraordinary six-hour interview whose transcript was published in the William and Mary Quarterly, Bailyn was asked, “Do you have any plans for an autobiography?” He replied then, “Oh, not at all. No.”

Bailyn certainly does have well-developed ideas about teaching, for which h. He credits Paul Buck, Harvard’s provost from 1945 to 1953. “From Buck I learned the basic requirement of good teaching: to somehow find the student’s instinctive, natural point of interest, encourage him or her to see its possibilities, and then leave the student alone to do what could be done.” 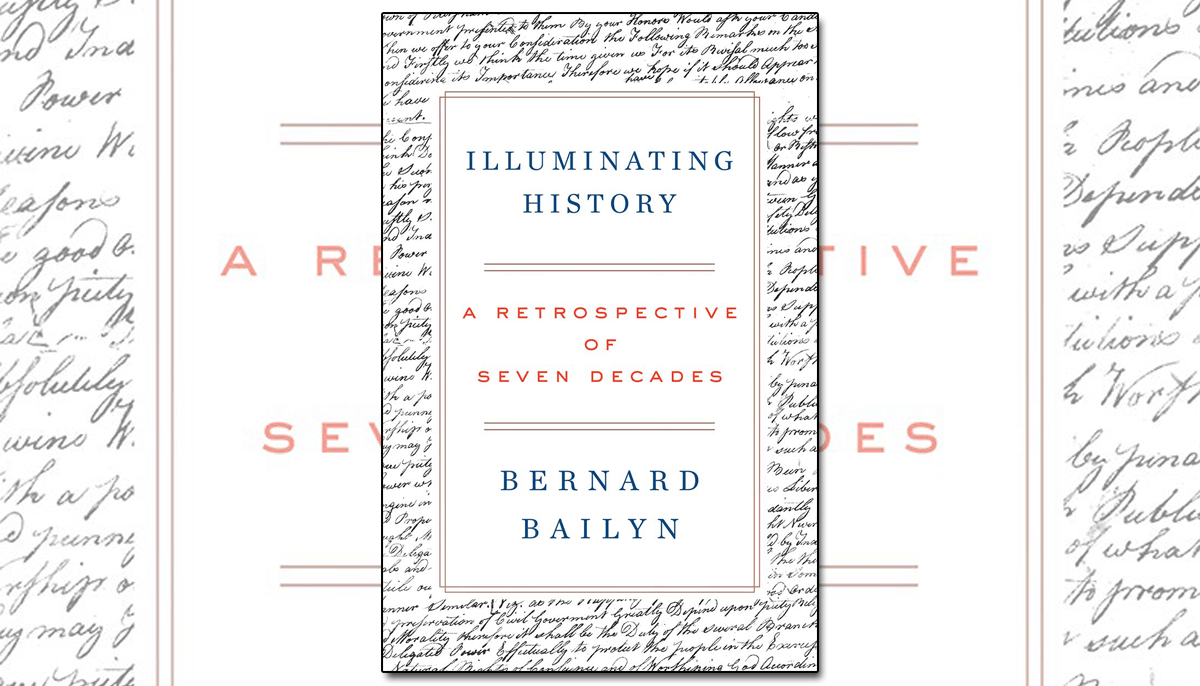 This book includes an account of the little-known years that Bailyn spent at the Harvard Graduate School of Education at the invitation of its “new young dean,” Frank Keppel, who had a grant from the Ford Foundation to hire someone to teach the history of education. Those years led to Bailyn’s 1960 book Education in the Forming of American Society. That book pushed back against the then-conventional view of what Bailyn describes as “education historians eager to trace the train of events that led inevitably to the triumph of contemporary schooling.” Instead, Bailyn emphasizes the role of family in education in early America: “Not only did the family introduce [children] to the basic forms of civilized living, but it shaped their attitudes, formed their patterns of behavior, endowed them with manners and morals.”

Bailyn is admirably attuned to this not only in the abstract but in individual concrete cases. Writing about Harbottle Dorr, Jr., a Boston shopkeeper and collector of newspapers who lived from 1730 to 1794, the historian reports: “His father, the leather-dresser, must have been a somewhat bookish man, whose interests no doubt influenced his son. For while his physical property was consumed by debts, he left to his son not only a rather expensive Bible but also thirty-three printed books and forty-four pamphlets as well: a small library that must have been selected with care. In all likelihood some of the publications were histories, for the sense of history the son acquired is something one learns early or not at all.”

Education, as Bailyn has described it, happens not only, or even mainly, in schools, at least when “one thinks of education not only as formal pedagogy but as the entire process by which a culture transmits itself across the generations.”

The paradox is that Bailyn, the proponent of the importance of family in education and in the cross-generational transmission of culture, is frustratingly thin on detail when it comes to his own background. The book begins with the confession that “my education began in an addiction I had somehow acquired to reading.” Somehow? Bailyn writes, “My parents were complicit in this addiction, and they had an expert to advise them. Hartford’s biggest and best bookstore, which once had sold books to Mark Twain, was then owned by a friend of theirs, Israel Witkower, an émigré from Vienna.”

Family’s role in education, dominant in the early period, had perhaps receded some by the early 20th century. Bailyn dwells on the formal education he got, especially at Williams College (where he “wrote—and wrote and wrote”) and from two English teachers at Hall High School in West Hartford. But Bailyn was, somehow, a “compulsive reader” even before arriving in high school.

In this, “the most personal of Bailyn’s works,” we learn more about Harbottle Dorr Jr.’s father—his profession, the contents of his library, his sense of history, even his name—than we do about Bernard Bailyn’s own father.

“Bernard Bailyn is a man who protects his privacy,” Michael Kammen and Stanley N. Katz write in the opening essay of The Transformation of American History, a festschrift published in 1991.

So if this is “the most personal” of Bailyn’s works, that is not saying much. It is a low bar to clear. What accounts for the reticence? Illuminating History itself suggests some answers.

Bailyn appears to want to avoid falling into the trap of his Harvard predecessor Samuel Eliot Morison; Bailyn writes that in Morison’s later work, “The writing became somewhat self-indulgent, the author’s personality increasingly intrusive.” (Though Morison, too, Bailyn writes, “cultivated his privacy” and “took steps to see to it that no one would write an intimate biography of him.”) In the William & Mary Quarterly interview, Bailyn says disapprovingly that Morison slipped into the “self-referential,” started “spinning the stories a lot around himself rather than around history.”

It’s possible that Bailyn is too modest. Illuminating History paraphrases the historian’s own father-in-law (identified in the text only as “Paul Lazarsfeld, a sociologist”) as offering three justifications for a biography as history. “A person of great consequence in human affairs,” “a representative of a group of some importance,” or “excellent witnesses . . . present at the right place and the right time.” Bailyn doesn’t say which of these three groups he belongs to; maybe he thinks he doesn’t belong to any, though arguably he fits all three. The rest of biographies are “studies in human character, studies in human nature and the fascination of people as such.”

As for Bailyn’s father? The book Hartford Jews, 1659-1970, by Rabbi Morris Silverman, reports that Charles M. Bailyn practiced dentistry in Hartford 26 years and had been born May 15, 1888, in Russia.

Perhaps some hints of the personal material actually are here if one reads just carefully enough between the lines.

One chapter in Illuminating History concludes with a quote from Peter Miller, a resident of an 18th-century Pennsylvania German utopian cloister that included two schools, one for singing and one devoted to calligraphy. Miller concluded his chronicle of the settlement with “words of gratitude” that, as Bailyn put it,
“would have parallels through generations of American life.” Miller writes that because America had accepted the settlement’s founder “who had been driven out of his fatherland, and granted him and his whole family complete liberty of conscience, therefore it will always be blessed and be a nursery of God, which shall bear him much fruit, for the promise given to Abraham must be fulfilled: ‘In thy seed shall all generations of the earth be blessed.’”

It can’t escape Bailyn that, at age 97, even without a coronavirus pandemic, he’s running out of time to shape the telling of his own story. One chapter of this book is about Robert Keane, who sat down on June 1, 1653, to write his last will and testament and, “as he drew to the end,” “contemplated the completion of the will and his own mortality.”

Illuminating History concludes with “memorial minutes” written by Bailyn for two of his teachers, Morison and Oscar Handlin. Bailyn relies on a Handlin essay, “Being Jewish: The Endless Quest.” Bailyn starts Handlin’s story there: “Born into the inner life of that Yiddish-speaking, Hebrew-worshipping world, Handlin as a boy experienced it all, identified with it, felt comfortable in it. . . . For him the love of learning lay at the heart of it all.”

Whoever crafts the memorial minute for Bailyn will have less material to work with for the boyhood section about Bailyn than Bailyn did for his about Handlin. The tale awaits a storyteller with Bailyn’s own scrupulous attention to truth and context.

Ira Stoll is managing editor of Education Next and author of Samuel Adams: A Life.