“Has the public turned on teachers?” asked a recent Education Week headline. In the article that followed, Madeline Will reported on a growing perception among teachers that they are under attack from parents (and opinion columnists) frustrated with how teachers unions are slowing the pace of school reopening. Yet she also drew on recent data from Education Next on public opinion to put those perceptions in context. Our nationally representative survey of parents found that, as of November, parents’ views of whether teachers unions have negative or positive effects on public schools hadn’t changed much since before the pandemic. If anything, parents seem to be viewing unions in a more favorable light.

So what exactly do our data show? And what could explain that unexpected result? The question we posed about teachers unions did not ask specifically about their role in reopening fights. Rather, it is a generic question that we have used for almost a decade to track Americans’ attitudes toward unions. The full wording is, “Some people say that teacher unions are a stumbling block to school reform. Others say that unions fight for better schools and better teachers. What do you think? Do you think teacher unions have a generally positive effect on schools, or do you think they have a generally negative effect?”

It is certainly the case that responses to this question could fail to capture real frustration among parents about the unions’ stance on reopening. It is the use of this question, though, that makes it possible for us to compare parents’ responses now with those of parents before the pandemic. If the position unions have taken in reopening fights is in fact a significant development, we would expect that to carry through to parents’ general attitudes toward unions.

The nearby figure shows the share of parents reporting that unions have a positive and negative effect in four nationally representative surveys we’ve conducted between May 2018 and November 2020. It reveals that for parents, as is the case for the broader public, the balance of opinion has shifted in favor of teachers unions over that stretch. The share of parents reporting they have a positive effect has increased by 10 percentage points, with the bulk of that increase coming prior to the pandemic. The share reporting a negative effect fell by four percentage points between May 2018 and May 2019 and has been essentially flat since that time. There’s certainly no evidence that parents’ views of unions have soured. 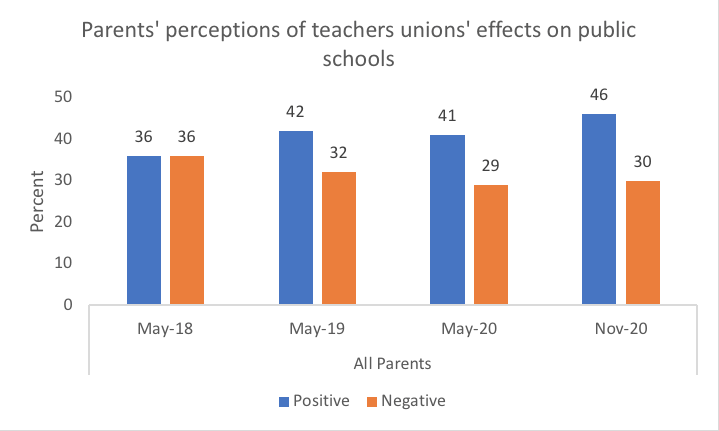 We see further evidence that reopening fights have not yet altered attitudes toward teachers unions when we break out the November 2020 data by whether the parents’ children are attending school in person. In fact, parents whose children are all fully remote are less likely to report that unions have negative effects than are parents whose children are all in person full time. (Here I’ve excluded parents of students in hybrid models and parents with children experiencing more than one instructional model.) Why is that the case? The most likely explanation is that attitudes toward unions are strongly influenced by partisan identity. Forty-nine percent of Republican parents, but just 19 percent of Democratic parents, say that teachers unions have negative effects. The shift in opinion in favor of teachers unions in the past two years mirrors an increase in the share of parents in our sample who identify as Democrats. And our recent report documented how the children of Republican parents are more likely than the children of Democrats to be attending school in person. Even when we look separately at Republican and Democratic parents, however, we see no evidence that those whose children are remote are more critical of unions. 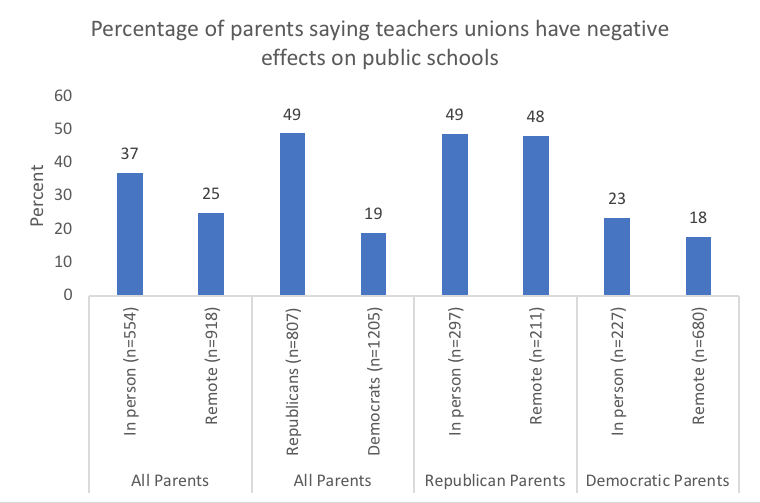 In short, the nationally representative survey of parents we conducted in November provides no evidence that the school-reopening fights have altered parents’ views of teachers unions. It may be that the unions’ role in these fights has not received much attention in local news coverage, or that parents haven’t paid such coverage much attention. Particularly in these polarized times, Americans’ attitudes toward unions may depend more on their partisan identity than on their perceptions of unions’ role in local disputes. At any rate, that appears to have been the case as of November. Whether that will continue is an open question, particularly if school buildings stay closed to students even after teachers are vaccinated.

Martin West is an associate professor of education at the Harvard Graduate School of Education, deputy director of Harvard’s Program on Education Policy and Governance, and editor-in-chief of Education Next.

The post Have Parents Turned Against Teachers Unions? Not Yet, Our Survey Shows appeared first on Education Next.

By: Martin R. West
Title: Have Parents Turned Against Teachers Unions? Not Yet, Our Survey Shows
Sourced From: www.educationnext.org/have-parents-turned-against-teachers-unions-not-yet-our-survey-shows/
Published Date: Fri, 29 Jan 2021 15:12:00 +0000