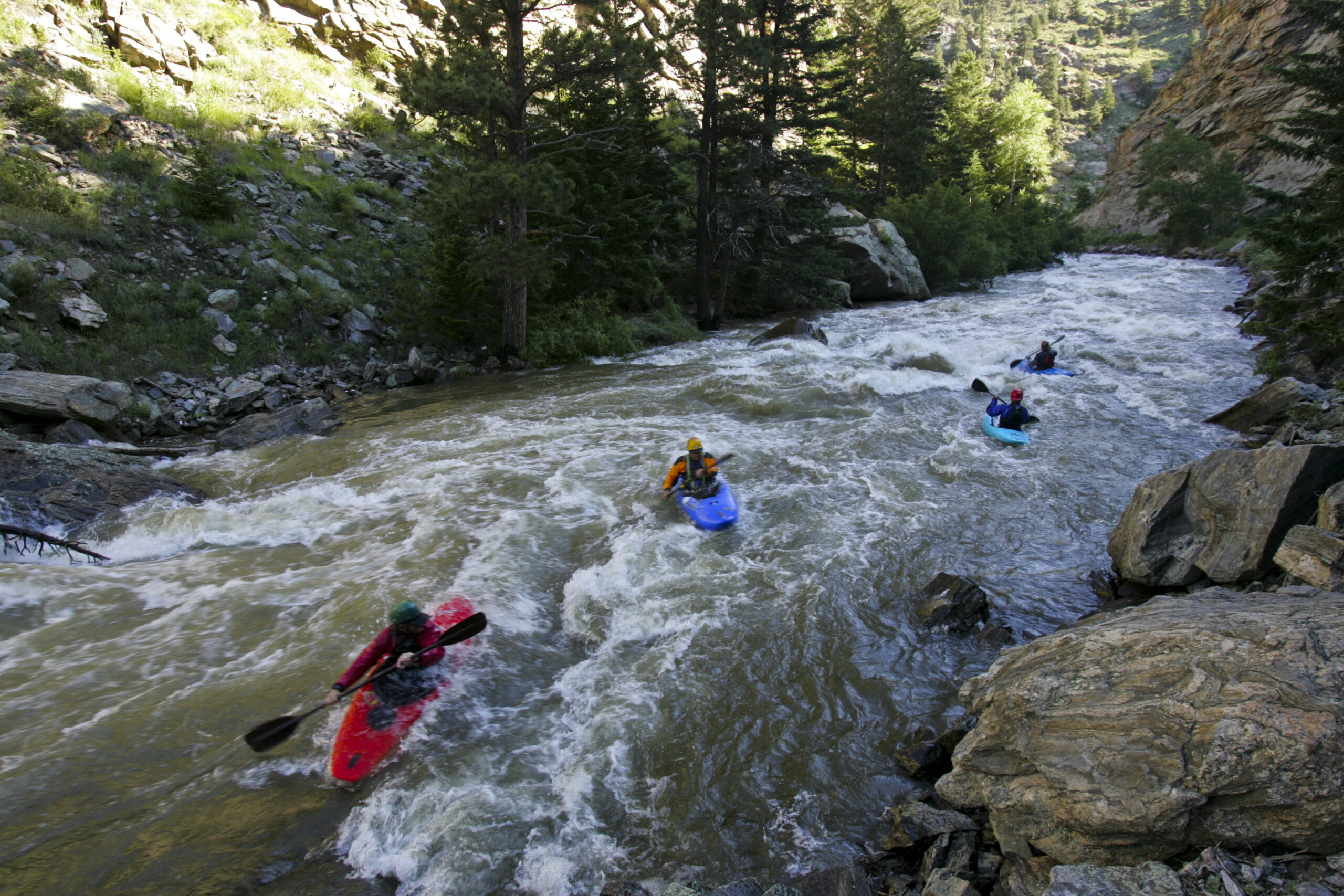 Jefferson County, like the rest of Colorado, reopened restaurants and loosened restrictions on people’s movement this week. But Clear Creek, one of its most popular draws, will remain closed.

Sheriff Jeff Shrader extended a ban on all swimming, tubing and kayaking in the creek that bisects the 580,000-resident county. That troubles the Front Range kayaking community that counts the Class II to Class V whitewater in Clear Creek as its backyard run.

“If any other stretch of river was closed anywhere in the state … if there were other recreation bans in that canyon, this would make sense. But this just seems so arbitrary,” said Hattie Johnson, the Southern Rockies stewardship director for American Whitewater.

American Whitewater and Colorado Whitewater sent a letter to Shrader and Golden Police Chief Bill Kilpatrick in early April, shortly after the county issued a ban on all water activities in Clear Creek.

The letter expressed concern about the lack of an end date for the closure order, noting that Front Range kayakers paddle the creek every spring as snow melts and that the creek’s proximity to the Front Range allows them to follow state guidelines by recreating near their homes.

The latest from the coronavirus outbreak in Colorado:

“Social distancing from a kayak or raft on Clear Creek is just as reasonable as on a trail,” read the April 10 letter. “We have a concern that not defining an end or reassessment date of the closure will lead to an unnecessary continuation of this policy once other use restrictions have been lifted and the paddling season is well underway.”

Their fears were realized this week when the county extended the closure through June 25.

The extension essentially nixed the kayaking season on Clear Creek, which fades as flows ebb to a mere trickle in midsummer.

Other counties have asked for and received variances from the state health department, including ones that allow for river recreation on the Arkansas River in Chaffee County and the Eagle River in Eagle County.

“We want to respect county decisions, and we know that closures are necessary at times and we understand that especially in this unprecedented situation. But we also recognize this is one of the most populous counties in Colorado with river recreation and this closure isn’t consistent with their own policies that have people rock climbing, riding their bikes and hiking all over that canyon,” American Whitewater spokesman Evan Stafford said. Stafford co-wrote the definitive guidebook to whitewater kayaking in the Western U.S. “For so many people, this is their local run. If one of the goals is to have people recreate but not travel widely, then having the canyon open helps meet that goal.”

A new bike path stretches along parts of Clear Creek, and the canyon boasts dozens of rock climbing routes that are regularly crowded with climbers. Fishermen also line the banks of the creek. All that recreation is allowed.

“But if you get in the water, you are breaking the law,” Stafford said.

OUR UNDERWRITERS SUPPORT JOURNALISM.   BECOME ONE.

Jefferson County Sheriff’s spokesman Mike Taplin said the county is concerned that people might not be able to socially distance along the creek. He pointed to recent photographs and videos showing dozens of people gathering along Boulder Creek.

“That’s what we are trying to avoid,” Taplin said, explaining that the closure order was approved by Golden’s fire department and police chief. “The decisions are being made for overall safety. We are not trying to alienate any specific person or sport. But sacrifices need to be made and everyone needs to make some sacrifices here.”

The sheriff and local police have not cited anyone for violating the closure order, but they are educating people along the creek.

“We understand that some people can do the right things some of the time, but if there’s no control, it seems like what can happen would look like Boulder,” Taplin said.

Colorado Whitewater and American Whitewater have told Golden Police and the Jefferson County sheriff that they would readily accept a closure of Golden’s whitewater park if they could paddle the rapids in Clear Creek Canyon.

“It seems like they are not really thinking about this or actually trying to reconcile conflicting recreational policies. It’s just easier for them to keep it closed since it’s coming up on high-water season,” Stafford said. “And that’s troubling. I think if you start closing the river because it’s dangerous, it creates the assumption that it’s safe when it’s open.”

Clear Creek County’s commissioners on Thursday approved a request for a variance from state deadlines that would allow the county to begin opening up, including allowing rafting. The Clear Creek commissioners also ended the potentially unenforceable public health regulation that allowed only locals to travel county roads.

The variance request is good news for John Rice, the owner of Clear Creek Rafting Co., which floats cross-county rafts to a take-out in Clear Creek Canyon in Jefferson County.

Rice said he is planning to reach out to Jefferson County’s commissioners and sheriff to make sure he can still use his take-out, which is just above an expert section of whitewater.

“I personally don’t see a social distancing issue with people kayaking that expert section from Black Rock down to Tunnel 1, especially since there are so many rock climbers, fishermen and hikers in the canyon. It’s hard to understand why boating has been singled out,” Rice said. He expects his business this season will be down about 50% because of the slow start, but said he has fielded “a lot of calls” this week from people wanting to raft.

“Maybe they should just prevent people from going through Golden. Or close the stretch below Tunnel 1,” Rice said. “The total shutdown of the river doesn’t make any sense at all.”

The latest from The Sun