As reviewed by Michael J. Petrilli

To say that the premise of this book is provocative is like saying LeBron James is a good basketball player.

Fredrik deBoer, an academic, internet gadfly, and self-described Marxist, argues that America’s much-vaunted meritocracy is actually an aristocracy, given that today’s rich and powerful did not earn their “just desserts,” but simply won their stations in life by lucking into the best genes. Likewise, the losers of the knowledge economy never had a chance, given their inferior intellectual inheritance. Education reform, then, is worse than pointless, because academic outcomes are largely determined at the moment of conception. “Educational achievement,” he claims, “is significantly heritable—that is, it passes from parent to child genetically, with biological parentage accounting for half or more of the variation.” We should abandon the ruse that “educational equality,” much less “equality of opportunity,” can ever be achieved and instead overthrow capitalism and redistribute income in order to attain equality of outcomes. As Andrew Sullivan wrote in his review of the book, it’s “Bell Curve Leftism” in its purest form.

As a Burkean conservative and fully committed education reformer, I am not the target audience for this book. Like any respectable policy wonk, I try to keep an open mind, but I have my limits. I am not likely to be persuaded to join the revolution, embrace the radical left, and give up on democratic capitalism. 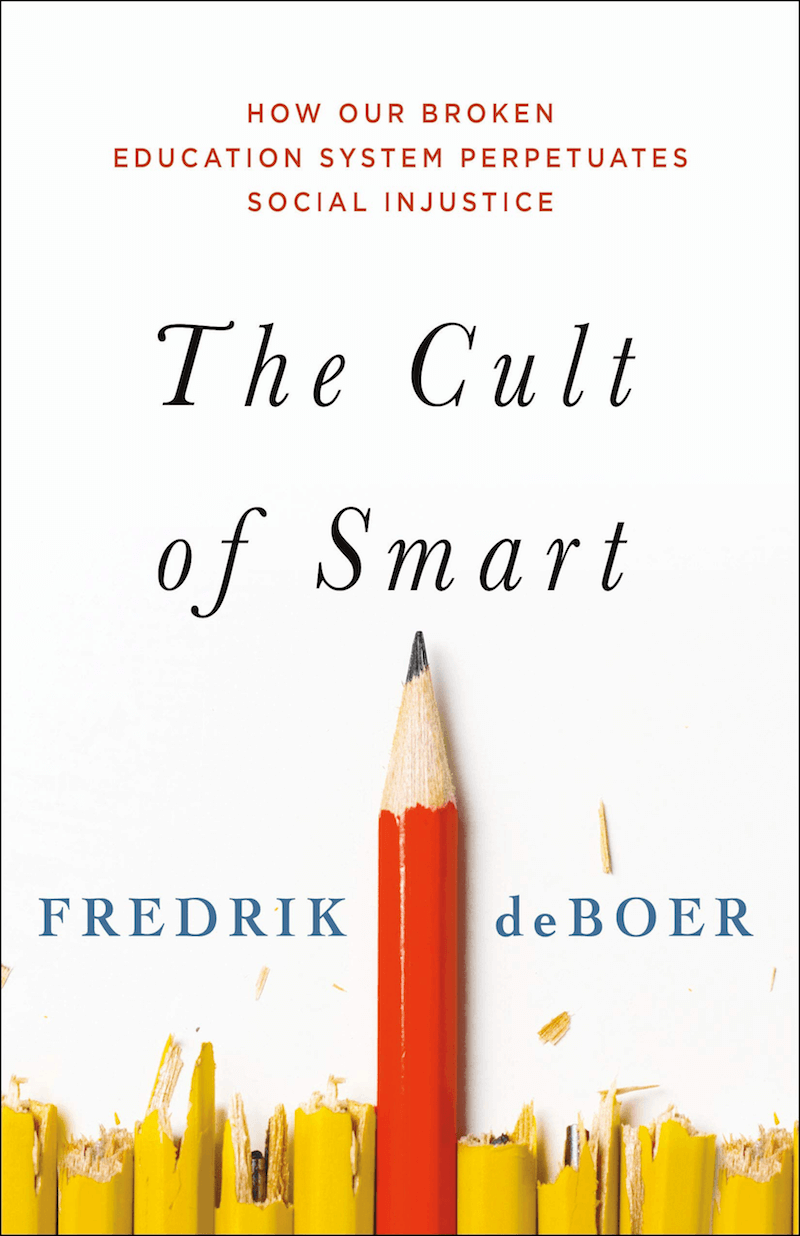 Much of the author’s argument rests on a shaky—even silly—caricature of the American meritocracy today. “The cult of smart,” deBoer explains, “is the notion that academic value is the only value, and intelligence the only true measure of human worth. It is pernicious, it is cruel, and it must change.”

What world is he living in? Who actually holds these beliefs, that academic value is the only value, and intelligence is the only true measure of human worth? DeBoer admits to spending his whole life in college towns, around academics. In those ivy-clad enclaves, and in the hyper-educated neighborhoods where we Bobos raise our young, yes, there’s an obsession with GPAs and SATs, in getting our kids into the most selective universities so that the next generation can rinse and repeat. But such places are bubbles, micro-cultures, niches. They aren’t the entirety of America. Go into a typical high school and find out who the popular kids are. The honors students or the athletes? If our country has a cult, it has always been the Cult of Anti-Intellectualism.

There was a time no so long ago when the education reform movement was myopically focused on test scores and college completion. Since then, though, the pendulum has swung dramatically to embrace “social and emotional skills” and career training as well—a development deBoer seems to have missed.

Nor does deBoer succeed in making the case that only the academically gifted enjoy affluence and status in our society today. Yes, back in the bubble, and especially in big cities like New York, Washington, and San Francisco, there’s a huge divide between the highly educated, highly paid “creative class,” on the one hand, and poorly educated, low-wage service sector workers on the other.

In the heartland, however, millions of well-paid jobs are held by people without four-year degrees, much less degrees from fancy colleges. Those jobs may or may not be intellectually demanding in ways that could be related to IQ, but they require myriad other strengths and qualities, from sociability to technical prowess to integrity to stick-to-it-iveness. And in that America, where people have lives and not just careers, status need not come from your job title or position description alone, but from your role as the Little League baseball coach, Sunday school teacher, president of the Rotary, or star in the church choir.

Still, deBoer’s central claim about academic differences—that some individuals are born lucky, with lots of intellectual potential, while others are not—deserves attention. It forces all of us working in education to ponder whether we have been kidding ourselves. In particular, have we been engaging in happy talk about how much progress is possible for the academically least talented?

DeBoer would want me to pause here and point out—as he does repeatedly—that he is talking about individual, and not group, differences. “The assumption that a link between genetic ancestry and academic ability must necessarily imply genetic group differences among races is a category error,” he writes. “It’s perfectly consistent to believe that the difference between individual students is largely genetic while the difference between racial groups is not.”

Still, if it’s true that intelligence is largely inherited—and that parenting and other environmental factors play a fairly minimal role, as deBoer argues—the implications for educational equity are profound. He acknowledges many of them. Any achievement gains from early childhood education, for example, will continue to fade out, “if we assume that there is some underlying academic deficit that asserts itself more the older a child gets.” So it goes, really, for all educational investments—we shouldn’t expect any of them to do much good in terms of closing achievement gaps. Not that deBoer is against spending more money on various educational initiatives. “I in fact think we have a moral duty to do so,” he writes.

He also has little praise for rigorous academic standards, given that he believes they are impossible to meet for so many students. “I argue that you should accept lower standards in order to keep more students in the system and spare those who will never meet the more rigorous standards from the frustration and humiliation of failure,” de Boer explains.

Even more controversial is his solution for what to do with the lowest-achieving students, those who can’t meet even those lesser standards: let them drop out at age 12. “There will always be a portion of adolescents who have no interest in continuing formal schooling,” he argues, “and forcing them to do so not only impinges on their freedom but wastes time, energy, and resources better spent on those who want to be in school.” And if such dropouts can’t get a job? No problem—the government will provide.

Viewed in a certain light, deBoer’s argument has its own internal consistency. As a Marxist, he wants to see our capitalist system overthrown and replaced with an expansive version of socialism. He has no use for education policies that increase achievement across the board; if they don’t narrow gaps between the left and right sides of the bell curve while also narrowing income gaps, they don’t interest him much.  Indeed, he acknowledges that IQs have been increasing over time—a phenomenon known as the Flynn Effect—and accepts that the National Assessment of Educational Progress showed gains as well in the not-so-distant-past. And he concedes that “there are interventions that can ameliorate some of the impact of genes,” that “individual students change their academic position relative to their peers often.”

But deBoer is not a “rising tide lifts all boats” kind of guy. “At scale,” he writes, “the trends are undeniable—and it’s at scale that our policy apparatus must operate.” As long as there are winners and losers in the genetic lottery—in other words, as long as forever—he thinks we should reject the whole liberal democratic capitalist project and opt for a People’s Republic instead.

I suspect few readers of Education Next are ready to go along with all of that. But we might nonetheless take from deBoer a new sobriety about what is achievable by even the best schools. Such a clear-eyed realism is not brand-new, of course; it’s what Charles Murray argued for in his 2009 book Real Education too (see “Reality Check,” Vol. 9 no. 1).

A reality-based approach would start by celebrating progress (both academic and economic) across-the-board rather than obsessing about whether various gaps are closing. That’s because human flourishing is not a zero-sum game. We should want all young Americans to learn as much as they can, to come as close as possible to achieving their full potential, even if that potential is not evenly distributed. We should want our high-IQ students to become high-achieving students and go on to cure diseases and write great novels and solve climate change and all the rest. And we should want our low-IQ students to learn as much as they can too, both so they live more fulfilling lives and so they can participate more fully in our democracy and economy.

Perhaps most importantly, when setting goals for our schools we should avoid both utopianism and defeatism. No, not everyone can achieve true “college and career ready” standards. But there’s also no reason to believe, as deBoer seems to, that most of our low-performing students today are anywhere close to hitting a ceiling on what they might learn or what they might do.  Virtually all children in America could perform at a higher level than they do today, and it’s more likely to happen tomorrow if we stop undervaluing and under-developing our nation’s human-capital potential.

Despite his radical politics and uneven arguments (including his ridiculous claims about charter schools), we shouldn’t entirely dismiss deBoer. He’s right that those of us in education—and especially in education reform—are uncomfortable talking about individual differences in academic talent. We prefer to pretend they don’t exist. Without addressing this basic, indisputable fact of human diversity in a straightforward way, we tend to set goals that are impossible to achieve, that encourage schools to ignore the needs of their most talented students, and that breed frustration, cynicism, and anger among front-line educators. Even though he’s a utopian, deBoer’s most important role, then, is to bring a healthy dose of realism to the education endeavor.

The post A Utopian Gets Real About the Limits of Schooling appeared first on Education Next.

By: Michael J. Petrilli
Title: A Utopian Gets Real About the Limits of Schooling
Sourced From: www.educationnext.org/utopian-gets-real-about-limits-of-schooling-book-review-cult-of-smart-deboer/
Published Date: Mon, 26 Oct 2020 09:01:47 +0000