Betsy DeVos must be quietly enjoying her retirement from public office. After resigning in protest against presidential actions during the closing days of the Trump Administration, she is beginning to see the fruits of her steady advocacy of school choice throughout her term in office.  When she took office in 2017, public support for choice took a nosedive, as opponents used her confirmation as a marvelous opportunity to mobilize public opinion against any policy that might take money away from the public school. Charter advocates began fighting among themselves, and the choice movement in general seemed in disarray at the very time it had access to the highest levels of the federal government. I discussed the challenges and some ways to address them in a report, “Toward Equitable School Choice,” issued as part of the Hoover Education Success Initiative.

But within three months of the beginning of the Biden Administration, school choice is rebounding. As I write in an oped in The Wall Street Journal, teacher unions are on the defensive and state legislatures are enacting choice initiatives and expansions in Arkansas, Florida, Indiana, Kentucky, Montana, West Virginia, and elsewhere.

Excellence in Education, the American Federation of Children (Betsy DeVos’s home base) and the EdChoice think tank all deserve the applause of choice advocates for their hard work, but the driving force seems to be public dismay with the public school response to Covid-19. Here is a graph from an EdChoice polling effort that documents the change in opinion that has been happening of late. Pay less attention to the level of support, as that is affected by the wording of the question. Focus on the trend line, which is uniformly upward bound across the various choice options under consideration.  Betsy DeVos must feel like Johnny Appleseed.  When seeds are scattered, predators eat most of them and saplings take time to root, but some trees blossom and yield good fruit. 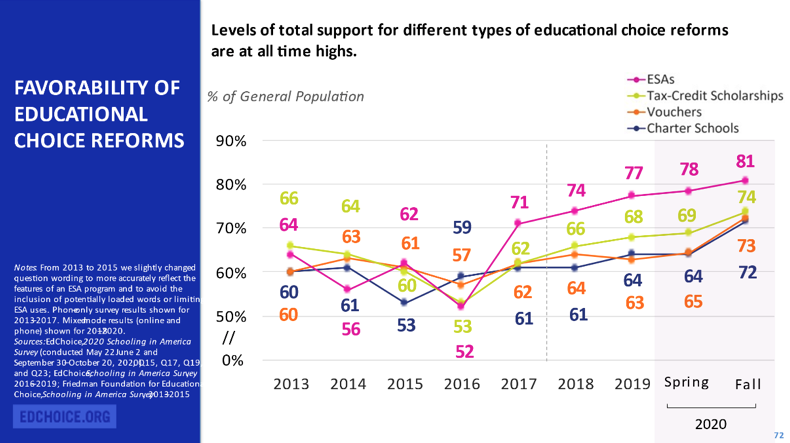 Paul E. Peterson is the Henry Lee Shattuck Professor of Government and Director of the Program on Education Policy and Governance at Harvard University, a Senior Fellow at the Hoover Institution at Stanford University, and Senior Editor of Education Next.

The post Betsy Appleseed and School Choice appeared first on Education Next.