“Supply-side progressivism” was the topic of a recent New York Times article by Ezra Klein, citing “Cost Disease Socialism,” a new paper by the Niskanen Center.

“We are in an era of spiraling costs for core social goods — health care, housing, education, child care — which has made proposals to socialize those costs enormously compelling for many on the progressive left,” Steven Teles, Samuel Hammond and Daniel Takash write in the Niskanen Center paper Klein mentions.

Klein went on to say:

There are sharp limits on supply in all of these sectors because regulators make it hard to increase supply (zoning laws make it difficult to build housing), training and hiring workers is expensive (adding classrooms means adding teachers and teacher aides, and expanding health insurance requires more doctors and nurses) or both. “This can result in a vicious cycle in which subsidies for supply-constrained goods or services merely push up prices, necessitating greater subsidies, which then push up prices, ad infinitum,” they write.

Something like that description may also apply to Arizona’s success in spurring academic growth in the pre-pandemic period. Arizona has the largest charter-school sector in the country, serving about 22 percent of the Grand Canyon State’s public-school students. Add to that private-school choice programs in the form of scholarship tax credits and Education Savings Accounts, and the result is that the supply of new schools has been relatively unconstrained. This suited Arizona’s needs when choice programs first passed in 1994; at the time Arizona was a state rapidly growing in population and the existing schools and students were attaining a low-to-average level of academic performance.

The National Center for Education Statistics has data on the increase or decrease in the number of public schools by state, presented below in Figure 1. 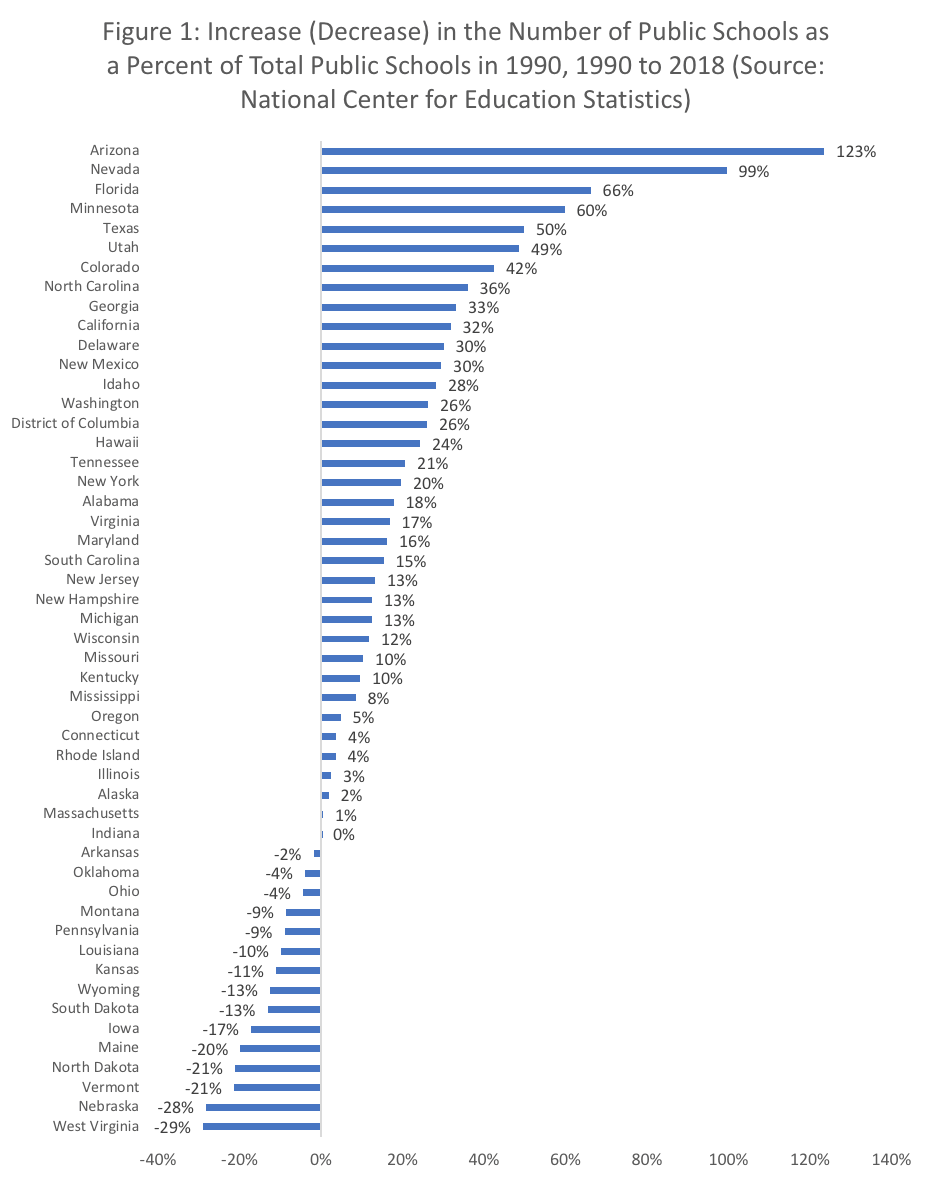 Arizona has been putting more money into more schools. Many other states, meanwhile, have been putting more money into fewer schools. Former Intel Chairman Craig Barrett opined that a key element of successful education reform needed to be “tension in the system.” Creating new schools to compete for students creates tension in the system, and nowhere has embraced that process as strongly as Arizona. While the supply of new schools was not constrained in Arizona, spending per pupil has been constrained. Arizona is a low-income state with an unusually large elderly population and relatively large family sizes, and thus a small working-age population and rapid population growth. None of these things equips Arizona to win a per-pupil funding competition.

The Stanford Educational Opportunity Project linked public-school academic results across states between 2008 and 2018 overall and by student subgroup. These allow comparisons on academic proficiency, growth, and progress over time during this period. Scholars generally regard academic growth as the best measure of the academic quality of a school. As the project summarized, “The learning rate indicates approximately how much students learn in each grade in a school, district, county, or state. Because most educational opportunities in grades 3–8 are provided by schools, the average learning rate largely reflects school quality.” 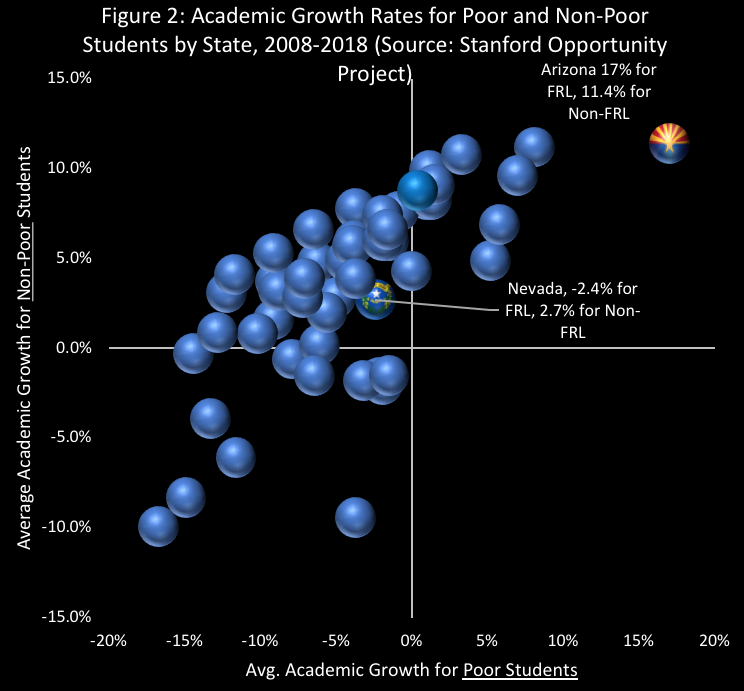 Klein’s supply-side observation merits empirical investigation as pertains to schools, but Figure 2 also notes the academic growth rate of Arizona’s neighbor Nevada. Nevada had the nation’s second-largest increase in schools and shared Arizona’s rapid-population-growth trend but did not experience remarkable levels of academic growth. Why might that be?

Nevada has a much smaller charter-school sector, meaning that the Silver State’s enrollment growth has been absorbed mostly by building new district schools. Arizona developed a diverse set of schools focusing on wildly different offerings such as the arts, classical education, STEM, equestrianism, and much more. Most of Nevada’s schools followed the Clark County School District formula as it struggled to build relatively standardized schools fast enough.

Having the highest rate of academic growth among American states does not translate into becoming a world-beater. If you examine Arizona’s 4th- and 8th-grade NAEP scores in math and reading, they reveal below-average scores on average at 4th grade, with 8th-grade scores at or close to the national average. Given that the American national average plays poorly in international comparisons, Arizona had much work left to do, even before the pandemic dealt a substantial academic setback to students. There is, however, a great accomplishment for Arizona educators to build upon: before the pandemic, Arizona public-school students learned more per year than students in any other state.

Matthew Ladner is the Executive Editor of RedefinED.

The post The State that Created the Most New Schools Is Also the One Where Students Learned More Than Anywhere Else. appeared first on Education Next.

By: Matthew Ladner
Title: The State that Created the Most New Schools Is Also the One Where Students Learned More Than Anywhere Else.
Sourced From: www.educationnext.org/state-that-created-the-most-new-schools-is-also-the-one-where-students-learned-more-than-anywhere-else-arizona/
Published Date: Tue, 05 Oct 2021 09:00:18 +0000