Imagine a world where everyone lives with dignity. Dignity born of having the capabilities to function in straightforward ways like being healthy, having a good job, and being safe; as well as in more complex ways like being happy, having self-respect, and being calm. This would be a far more peaceful, prosperous, and sustainable world than we have now.

A new report by the Wittgenstein Centre, commissioned by the Yidan Prize Foundation, draws on 70 years of research and shows that education—above any other factor—can create that world. Empowering women through quality education to close the gender gap in education is the most significant step we can take now.

Education is a human right, named in the Universal Declaration of Human Rights and essential to the exercise of all other human rights and to individual well-being. To educate a girl is to give her the means to live an independent and fulfilling life.

Educating girls also makes societies and economies stronger. Gender equality is smart economics—it enhances productivity and improves development outcomes, including prospects for the next generation and quality of societal policies and institutions.

Most wealthier areas of the world have approached gender equality in education. This includes the United States where, since the early 2000’s, the mean years of schooling of adult women gradually began to exceed that of men. But globally, there are still vastly more women over the age of 15 with no education (451 million women vs. 278 million men in 2020). The number of uneducated men has dropped significantly since 1950, whereas the number of uneducated women remains almost constant (446 million women vs. 318 million men in 1950). The gender gap is the clearest in Africa, Melanesia, and southern Asia (Figure 1).

Figure 1. Gender gap in mean years of schooling of the population aged 30-34 by world region, 2020 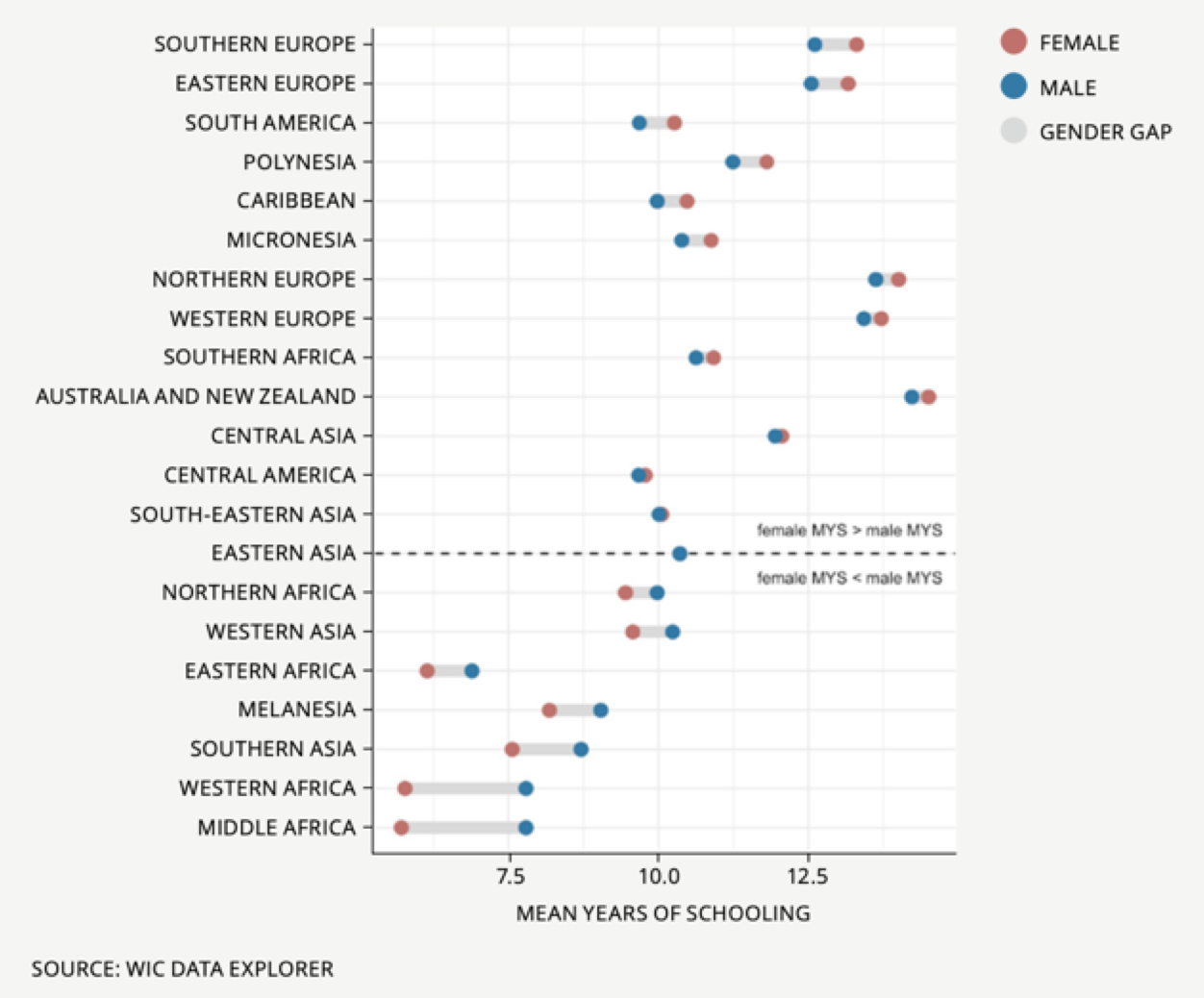 The Covid-19 pandemic has likely made the situation worse. For example, southern Asia classrooms have been fully or partly closed for longer than the global average, with remote learning being impossible for many. Many children, particularly girls, are likely to never go back to school.

Better educated women are more empowered to make informed choices. One critically important domain of decision-making is their reproductive health. Overwhelmingly, when women are better educated and have knowledge of (and access to) contraception, they choose to have fewer children. And those children tend to grow up healthier and better educated, raising the prospects of a demographic dividend that will boost their country’s growth and development. 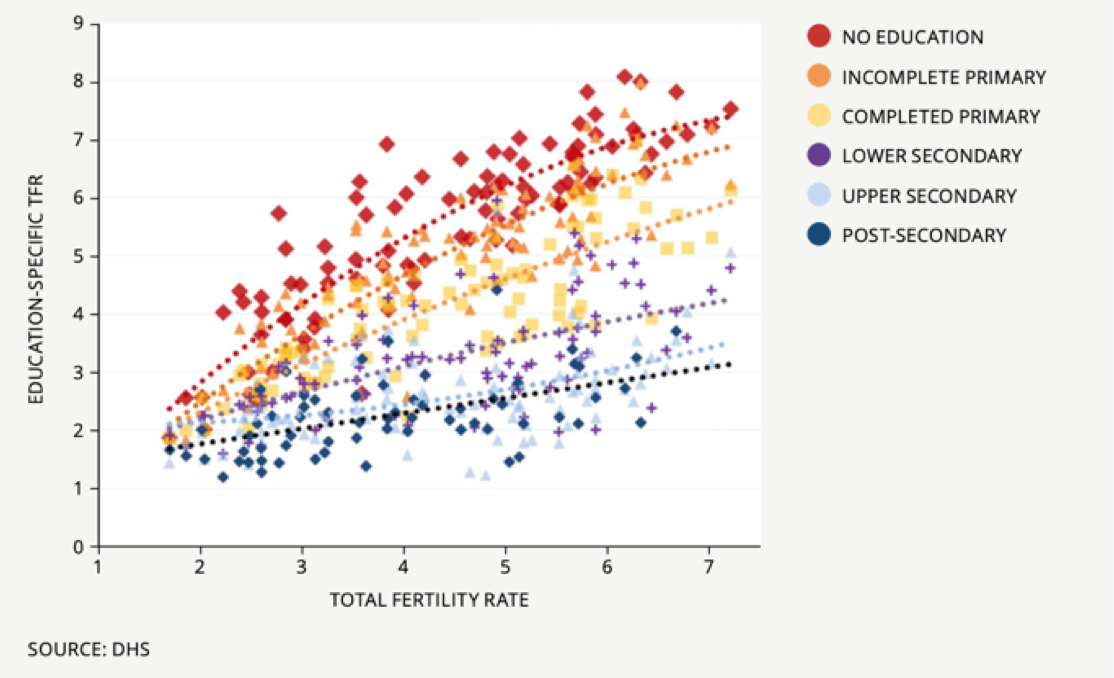 Female empowerment and female education also have a profound effect on the demographic development of the world. Our report shows that different future scenarios of female education alone can cause a difference in the world population size of more than one billion by the middle of this century, shaping the prospects for a sustainable future.

For many years, the development community has focused on primary schooling, but to go out and work productively you need to have a secondary school education as well. The report demonstrates higher levels of universal education can lead to wealthier, healthier, and more civically engaged populations who are more resilient to climate change.

Furthermore, girls are far more likely than boys to be out of secondary education in poorer countries—yet with respect to health and reducing child mortality, it has been shown that (at least) junior secondary education for women is a threshold for significant improvement.

The best policy for the students and the countries alike would be for all nations to require 10 to 12 years of obligatory schooling and education, for both sexes. This has been in place for a decade in richer countries.

Investing in educating girls is a matter of urgency—for all of us—because we are living in an increasingly inter-connected world.

By 2050, nearly 60 percent of the young people in the world are going to be in Sub-Saharan Africa or South Asia. That’s the generation that’s going to shape climate change, politics, economics, peace, stability.

So, it’s not in anyone’s interest to have those children going through school systems that are very stressed—that lack teachers, computers, and books. And above all else, it’s in all our interests to educate the next generation of girls.

It can be hard to think ahead, to 20 or 30 years from now, but the investments we make in education today are critical for shaping our future.

Christopher Thomas is director of partnerships at the Yidan Prize Foundation.

The post Educating Girls Will Be Our Most Powerful Force for Global Change appeared first on Education Next.

By: Christopher Thomas
Title: Educating Girls Will Be Our Most Powerful Force for Global Change
Sourced From: www.educationnext.org/educating-girls-will-be-most-powerful-force-global-change/
Published Date: Wed, 03 Nov 2021 09:00:59 +0000