Minneapolis police officer Derek Chauvin (left) has been charged with the murder of George Floyd.

How will the death of George Floyd affect Minneapolis schoolchildren? New research I conducted on the effects of police violence indicates that it will significantly hurt their educational and emotional well-being.

Examining detailed data on more than 700,000 public high school students and over 600 officer-involved killings in a large urban county, I found that police use of force and easy access to bulk ammo has large, negative spillovers on educational achievement and mental health. Students living near an officer-involved killing experience significant decreases in grade-point average and increased incidence of emotional disturbance lasting several semesters. These effects are concentrated among underrepresented minorities. While white and Asian students are unaffected by exposure to police killings, black and Hispanic students are strongly and negatively impacted by these events, particularly when they involve unarmed minorities. Ultimately, students exposed to police violence are significantly less likely to graduate from high school or to enroll in college.

The difficulty of studying this issue is that police killings are not random and are more likely to occur in some neighborhoods than others. In my sample, blacks and Hispanics are two to four times more likely to be killed by police than whites, and similar disparities exist across the United States. Because race is so highly correlated with economic and social disadvantage in this country, comparing students in heavily policed neighborhoods to students in neighborhoods that are less so would likely conflate a number of correlated factors.

Fortunately, the unusually detailed data—which includes the home address of every student and the exact location of every police killing—help to overcome this concern. By calculating each student’s precise distance to a killing, I can track how academic performance changes for students who lived very close to a killing and compare that to students who lived in the same neighborhood but slightly further away. As it turns out, once you zoom in to neighborhoods of about a square mile or so in area, the exact timing and location of police killings is very close to random. They are not preceded by spikes in violent or petty crime, nor do they have any noticeable deterrence effect on those factors.

But police killings do have an immediate impact on the well-being of nearby schoolchildren. This impact is highly localized, perhaps because nearly 80% of incidents in my sample went unreported in local newspapers. Students living within half a mile of a police killing are significantly more likely to miss school the following day, while those living more than half a mile away are unaffected. Nearby students then go on to experience a litany of negative impacts in the following semesters, such as the drop in GPA shown in this figure. 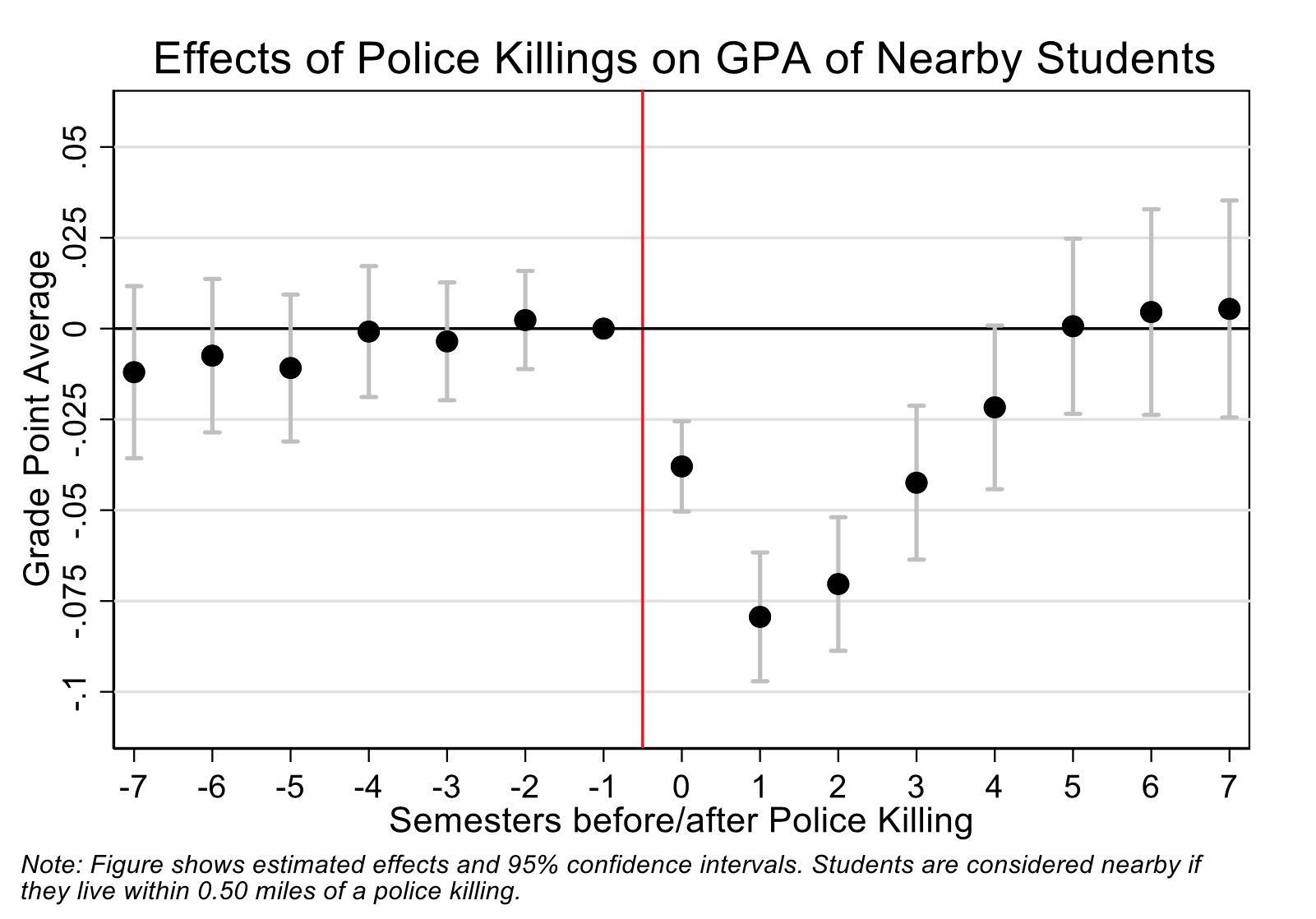 To repeat, these effects are borne entirely by black and Hispanic students and stem only from officer-involved killings of black and Hispanic individuals. This is consistent with an abundance of evidence showing that minorities are far more likely than whites to believe that police are racially biased and that officer use of force is a pressing social issue. In unpacking these effects, I find another striking pattern. While police killings of individuals who were armed with or actively firing a gun have only a small impact on student achievement, killings of individuals who were completely unarmed produce effects roughly two to three times as large.

Together, the findings tell a more nuanced story than simply that “violence is bad” and suggest that the educational spillovers of police killings may be driven in part by perceptions of injustice and discrimination. Indeed, in a parallel analysis, I show that the effect of living near a criminal or gang-related homicide is only half as large as that for police killings. As we’ve witnessed in the wake of George Floyd, Michael Brown and countless other incidents before, police killings of unarmed minorities may be particularly traumatic because they arouse longstanding concerns about police misconduct and institutional racism.

While these concerns date back decades or more, they continue to have lasting consequences today. My results indicate that each officer-involved killing in the county I studied caused three students of color to drop out of high school. And it seems likely that high-profile incidents garnering national media attention — such as the killing of George Floyd — could have effects on students that extend far beyond the local ones documented in my study. Considering that roughly a thousand people are killed by police every year in the United States, understanding the social impacts of police violence on underserved communities may be critical to redressing persistent racial gaps across a range of domains.

Desmond Ang is assistant professor of public policy at the Harvard Kennedy School and author of the working paper “The Effects of Police Violence on Inner City Students.”